For the last 54 days, the people of Gujarat, all the Corona Warriors, warriors of Gujarat have been fighting against the Corona. We cooperated well in the lockdown, people cooperated even when they were in trouble. All the officers, employees, doctors, nurses, cleaners of the corporation, policemen have all done their duty day and night in this war without caring for themselves. I congratulate and thank you all.

They all did a wonderful job of disproving the notion that government people are not sensitive.

No concessions will be made except for essential items in the Containment Zone, and the arrangements that are in place will continue. And will be reviewed on a case-by-case basis in the near future. Essentials will be on sale from 8 a.m. to 3 p.m. Health care will also be exempt. And shops will be allowed to open in the non-contained area from 8 am to 4 pm. Night curfew will be enforced from 7 pm to 7 am as per the guidelines of the Center. School-college, coaching classes will be closed in both the areas. The gym, swimming pool, garden, theater, or public events will be closed 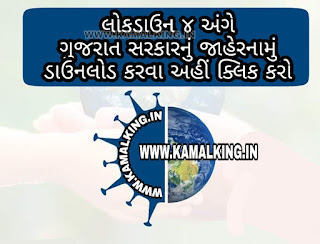 PM Modi and the central government took timely steps and decisions. Lockdown 1 and 2 had a different thing and 3 had a different thing. Issued notification of 4 yesterday. The battle of Corona is still a long one. Several attempts are being made to defeat Corona. In the 55-day lockdown, people who earn their living every day, workers, middle class people have a lot of problems. Together we have to stop Corona. With these two factors in mind, the Gujarat government has taken decisions today out of concern for the poor, laborers, laborers and daily wage earners.

Lockdown 3 had green, red and yellow zones. In which Green and Orange were given some concessions. The guidelines of the Government of India this time have been decided on the basis of the areas where the transition has taken place as per the guidelines of the State Government and the Central Health Department. The state government will zone as per the guideline of the Center. Part of the arrangements in the state - one containment and the other non-containment zone. Containment zone where cases are coming out. And another where conditions are good. We are the Collector and Muni. The zone will be declared in consultation with the Commissioner,

City bus service, private bus service is not allowed in the container area. Auto rickshaws will be introduced in the entire state except Ahmedabad and Surat outside the containment zone. In the second phase, a decision will be taken about these two cities. A rickshaw will carry a maximum of 2 passengers. Exemption will be given in the market area, shopping complex. Odd and Even will have to open simultaneously. 50 percent will be open one day and 50 percent the next. And the shop should not have more than 5 customers. Containment zone laborers and

>> Pan-galla, shops will be kept open in the western area of ​​Ahmedabad
>> Hair salon can be opened in non containment zone
>> Taxi service will be started in the eastern part of Ahmedabad
>> Restaurants across the state will continue for the purpose of home delivery only in the canteen zone
>> Private offices can be started with 33 per cent employees
>> The people of Gujarat have been fighting against Korona for 54 days
>> So far the public has cooperated in the lockdown
>> Everyone accompanied by thinking of the other
>> Officers, employees performed well
>> No concessions of any kind except essential items in the containment zone
>> Permission to sell essential items from 8 am to 3 pm
>> Schools-colleges, gyms, swimming pools, gardens, malls, cinemas, religious programs will be closed in both the zones, city bus service, private services will also be closed.
>> Autorickshaws will be started in the entire state except Ahmedabad and Surat. A maximum of two passengers can be seated in one rickshaw.
>> 50 people allowed to go to the wedding and 20 people allowed to attend the death
>> Diamond factory, looms factory can be started with 50 percent staff


Economic activities, shops and offices will be started outside the containment zone in West Ahmedabad. Local authority arrangements will be made. Exemption will not be available in the eastern part of Ahmedabad. Should get to the second stage. ST buses will be started all over Gujarat. ST buses will not be allowed in Ahmedabad. No more than 50 persons will be allowed in the marriage ceremony. 20 people will be allowed at the funeral of the deceased. Allow shops outside the containment area. Pan masala will also be allowed. Even the shop should not be crowded. This will allow the item to be removed quickly. Barber shops are allowed following beauty distances in beauty parlors and salons.

Textiles are allowed in Surat. And will be turned on both in and out of the city. Social distance will be observed. Transportation will be allowed all over Gujarat. This guideline will be followed from Tuesday. A fine of Rs 200 will be imposed on those who do not wear a mask and spit.