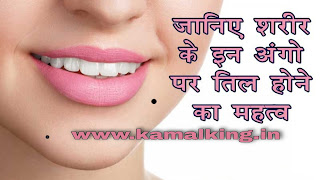 Shutterstock
While finding a mole on your arm is common, it can mean a couple of different things. According to World of Feng Shui, a mole on your arm could mean that you have to work super hard in everything you do and still might not get recognition for it. Additionally, according to The Encyclopedia of Superstitions, a mole on the arm means someone is “cautious.”

Your arms are typically one of the most exposed parts of your body. Overall, getting freckles or even sunburn on your arm isn’t a huge deal. However, a mole on your arm might mean one of several things. If you know it’s a mole on your arm, there’s a small chance it could be melanoma. Healthline notes, “The most common body sites for melanoma in women are the arms and legs.” So, if you have a mole on your arm and are a woman, it might be smart to get it checked out by a professional to make sure it’s not melanoma. If all’s well,

maybe ancient astrology is correct and your mole is just evidence that you’re a really hard worker.

On your back, a mole could symbolize bad luck

Shutterstock
Having a mole on your back is pretty darn common, but it can mean quite a few different things, according to ancient Chinese astrology. As explained by World of Feng Shui, a mole on your back can either mean that you have no good fortune, get betrayed a lot, or don’t really want to work hard. Obviously, those aren’t exactly positive things. Still, that’s just a couple ways to look at what a mole on your back might be! Additionally, according to The Encyclopedia of Superstitions, a mole on someone’s back means they will face a lot of “obstacles and setbacks.”

A mole on your back might not even be a mole at all. According to WebMD, while a mark might look like a mole, it could be something else. Specifically, it might be a seborrheic keratosis. “Seborrheic keratoses are brown or black growths usually found on the chest and back,” according to WebMD. But don’t worry — they “do not normally lead to skin cancer.”

If you have a mole on your chest, count yourself lucky

Unlike your back, it’s relatively easy to check for moles on your chest or on or around your breasts. Using a mirror, you can closely inspect any spots and determine whether or not they are moles, or freckles, and decide if you need to be checked out by a doctor. Still, if you’ve found a mole on your chest or breast, it usually isn’t cause for concern. According to the Mayo Clinic, the chest is a super common location for moles to present themselves, and, unless it shows signs of melanoma, usually isn’t something to worry about. According to the Mayo Clinic, it’s important to see a doctor “if a mole looks unusual, grows or changes.”

If you see a mole on your neck, you might need to relax

Shutterstock
If you look in the mirror one day and see a mole on your neck, don’t fret. According to World of Feng Shui, “A mole found on the base of your neck can sometimes indicate a short life, with the possibility of being highly stressed out.” Of course, that doesn’t mean you’re going to live a short life, but maybe it’s a warning that you need to relax more.

Shutterstock
If you are curious as to what a mole on your forehead might mean, Chinese astrology says it points to prosperity, according to Cosmopolitan. Specifically, a mole right in the middle of the forehead means wisdom, and one on the right side of a forehead signifies that the person is a great partner. However, one on the left side points to bad luck. Additionally, according to the book, Dreaming The Future: The Fantastic Story Of Prediction, a forehead mole signifies “an active, enterprising person.”

Because your head and your face tend to see a lot of sunlight, it’s no surprise that the forehead is a pretty typical place for moles to appear, according to Healthline. Additionally, as WebMD reported, the head is also a normal location for seborrheic keratoses to develop. That said, since your head is exposed to sunlight practically every day, it’s not a bad idea to see a dermatologist if you find a mole on your head. Couldn’t hurt, right?

Shutterstock
Most people will think of Marilyn Monroe when they see a mole on someone’s upper lip. Or they’ll call it a beauty mark and go on about their business. However, according to Chinese astrology, a mole on your lip means that you want to achieve a lot in life and are likely to get ahead. Additionally, as noted by Cosmopolitan, if the mole is on a corner of your upper lip, that means you love to enjoy the “finer things in life.”

And while that description might make sense and fit you perfectly, since your lips tend to get a lot of sunlight, a mole on or near that area of your face could be cancerous. If you just got a mole on your lip though, it probably isn’t anything to worry about. According to Healthline, new moles on your face are usually basal cell or squamous cell cancers and are easily treated.

Shutterstock
A mole on your cheek is often referred to as a beauty mark. However, depending on what it looks like, a spot on your cheek could mean a few different things. According to Cosmopolitan, Chinese astrology states that a mole located on someone’s cheek means that they are a “courageous, sincere and studious person,” and are also fairly athletic and not materialistic. Specifically though, a mole “on the right cheek denotes a sensitive and caring person who values family,” while “one on the left cheek represents a person who is an introvert and sort of arrogant as well,” as noted by Cosmopolitan. Really, a mole on your cheek can mean a lot of things, so it’s not surprising if one of those attributes fits you.

Finally, remember that since your cheek sees a lot of sunlight, you should regularly be on the lookout for any new or changing moles on your cheek.

A chin mole may signify your tendency for blunt honesty

Shutterstock
According to Chinese astrology, a mole on your chin “indicates that the person is affectionate and caring,” Cosmopolitan reported. In addition to that, ancient astrology also says that a mole on someone’s chin “signifies adaptability, determination and stubbornness,” according to the magazine. If the mole is on the right side of your chin, that usually represents “logical thinking and diplomatic nature,” while moles on the left of the chin “represent a person who is straightforward, blunt and honest.”

If you have a mole on your chin, it’s similar to if you had a mole on any another area of your face, medically speaking. It’s important that you pay close attention to it and note if it changes in appearance, but really, it isn’t anything to worry about. However, a mole on your chin might be frustrating enough to get it removed, especially for women, as moles can grow hairs, as noted by Healthline.

Ancient Chinese astrology deems a mole on a person’s temple or hairline to mean that they will have a pretty great life, romantically and financially speaking. According to AskAstrologer.com, a mole there “denotes early marriage” and a “beautiful wife,” as well as “a possibility of sudden and unexpected arrival of money.”

might be easy to spot, a mole along your hairline or on your temple can be tricky to find. If you have dark hair, you might not notice a new mole near your hair as quickly as ones on other parts of your body. That said, because this area of your body is in a lot of contact with the sun (unless you always wear a hat), it’s a good idea to pay attention to any moles around there and watch out for melanoma. While moles on your temple or hairline aren’t necessarily always going to be cancerous, it’s still a good idea to have a professional check them out.

Shutterstock
A mole on your hand isn’t exactly common, but its alleged meaning when it comes to Chinese astrology is pretty interesting. A mole on your hand might mean that you are “hardworking and energetic,” as noted by Cosmopolitan. Additionally, according to World of Feng Shui, a mole on a woman’s hand could also mean that she has “unstable characteristics” and “a tendency to overspend.”