Govt Jobs: The Central Government Took a Big Decision on the Issue of Interviews in Government Jobs, From Now On 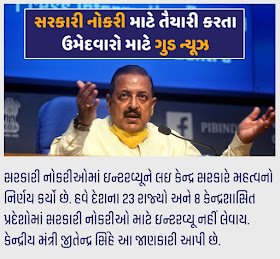 The Central Government has made an important decision to conduct interviews in government jobs.  Interviews for government jobs will no longer be conducted in 23 states and 8 union territories of the country.

Govt Jobs: The central government took a big decision on the issue of interviews in government jobs, from now on ...

Union Minister Jitendra Singh has given this information.

An important decision of the Central Government

Interviews will not be conducted for government jobs, appointments will be made on merit

Government Jobs Will No Longer Be Interviewed

Interviews for government jobs in 23 of the country's 28 states and 8 Union Territories, including Jammu and Kashmir and Ladakh, have now been scrapped..

Union Minister Jitendra Singh said that the interview system for Group B and Group C posts in the Union Government has been abolished since 2016.

He said that PM Modi had spoken of removing interviews from exams in Lalkilla in 2015 and giving jobs only on the basis of written exams..

Interviews in Group B and C have been closed since 2016

It is to be noted that the interview system for Group B and Group C posts was scrapped in 2016 in which Gujarat and Maharashtra accepted the rule very quickly, while other states showed reluctance to implement it soon.

However, now the system of not conducting interviews from 23 states and 8 Union Territories has been adopted.

IMPORTANT LINK::
CLICK HERE TO READ THIS NEWS IN GUJARATI

The Decision was Taken to Bring Transparency in the Recruitment Process.

In a statement, he said that the removal of interviews has been very helpful for students preparing for competitive exams to bring transparency in the recruitment process.

Earlier, it was often alleged that job interviews were rigged and that large sums of money were paid in return.