In 7th CPC Report, Annual Increment is being retained at 3%. But, there is no need to calculate three percent of amount for individual basic pay. Simply find the next cell of the value in the Pay Matrix Table. 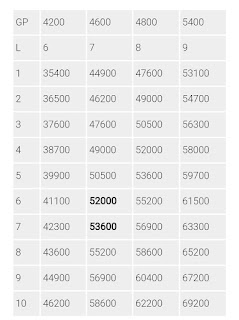 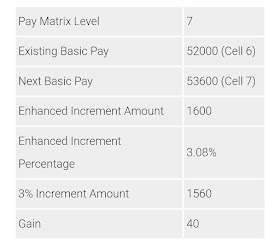 Latest 7th Pay Commission Arrears Calculator 2016. The government has announced the implementation of Seventh Pay Commission effective from 1 January 2016, that would hike the salaries and allowances for over 1 crore government employees and pensioners by at least 23.5 per cent.
Salary as per 7th Pay will be paid regularly from 1st July 2016 Salary that would be paid on 1st August.

2. Minimum Pay: Based on the Aykroyd formula, the minimum pay is recommended to be set at Rs 18,000 per month.

6. Fitment: A fitment factor of 2.57 is applied uniformly for all employees.

7. Annual Increment: The rate of annual increment is being retained at 3%.

8. Modified Assured Career Progression (MACP): a.  Performance benchmarks for MACP have been made more stringent from “Good” to “Very Good”. b. House Rent Allowance (HRA): Since the Basic Pay has been revised upwards, the Commission recommends that HRA be paid at the rate of 24% instead of 30%, 16% instead of 20% and 8% instead of 10% of the new Basic Pay for Class X, Y and Z cities respectively. The Commission also recommends that the rate of HRA will be incremented by 3% when DA crosses 50%, and further incremented by 3% when DA crosses 100%.