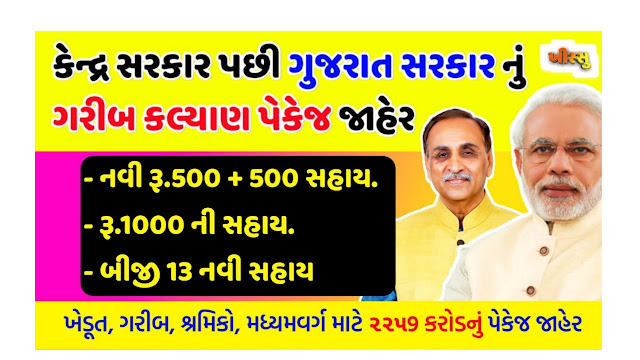 In Gandhinagar today, the Chief Minister's Secretary Ashwini Kumar had said about the relief package of the two corps, in which the Central Government has declared a poor welfare package in the case of Corona virus. An amount of Rs. In addition, Chief Minister Vijay Rupani also expressed a desire to help the citizens of the state in this difficult situation. The Rs 3 crore chief minister has also started providing poor welfare package and providing its benefits.

Following are the details of the 2259 crore poor welfare relief package announced by CM Rupani.

65.40 lakh ration card holders having priority under National Food Security Act and BPL other than priority. The 3.40 lakh ration card holders with cards are being given five kilograms of cereal per person and 1 kg of pulses, 2 kg of salt and 1 kg of sugar per card. Under this scheme, Rs. The state government is raising the burden of Rs 150 crore.

Under the National Food Security Act, it has been decided to give free food to the 61 lakh ration card holders with APL-1 card without priorities through the fair price shops in April. 10 kg of wheat per card, 3 kg of rice, 1 kg of sugar and 1 kg of pulses will be provided free of cost. For this purpose, Rs. The state government has levied Rs 275 crore.

For the homeless, destitute and non-ration card persons, the extension of the Annabraham Yojana is being extended to 5 kg of cereal per person and 1 kg of pulses, 1 kg of salt and 1 kg of sugar per card. A special survey has been conducted for this and distribution of these benefits to 4.26 lakh card holders has begun.

Up to 68.80 lakh working families in the state have a family of Rs. It has been decided to repay 1000 to the bank account through the DBT system and for this the State Government will provide Rs. 688 crore to be financed.

The deadline for paying electricity bills for March and April has been extended till May 15, 2020, so no penalty will be charged. In addition, commercial and industry connections have been decided by the distribution companies to waive the fixed charge on April. As a result of this, the power distribution companies will get around Rs. 450 crore will be raised.

Since Anganwadi centers have been closed, nutritious food has been provided to the children in the age group of 3 to 6 years in the form of Techhome ration. 15.70 lakh children have been benefited. The state government will provide Rs. 35 crores.

Due to the closure of residential hostels, ashram schools, child improvement houses under the Social Welfare Department, Rs. An amount of Rs. 5 has been paid. For which Rs. 5.40 crore will be used.

Due to the closure of residential hostels and Ashram schools under the Tribal Development Department, Rs. An amount of Rs. 5 has been paid. Rs. 25.78 crore will be used.

An average of Rs. It has been decided to pay the assistance of 25 persons. For which about Rs. It will cost 24 crores.

The elderly and the disabled beneficiaries will get a total of Rs. 1 assistance of Rs. About three and a half lakh elderly beneficiaries and Rs. 6 crore will be provided.

The state's three lakh forty-three thousand Ganges Swarupa mothers and sisters who live above the poverty line (non-BPL) will receive Rs. After paying the sum of Rs. 8 crore will be aided.