An important decision taken at a meeting of the state cabinet
Regarding loss of farmers' crops due to heavy and subdued rainfall
Rs. 1 crore will be assisted: Deputy Chief Minister Shri Nitinbhai Patel 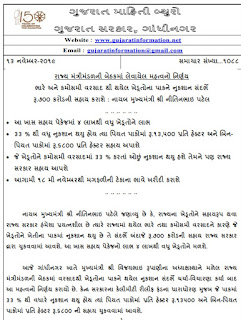 This important decision has been taken after a discussion on the loss of farmers' crops due to rain at a meeting of the state cabinet meeting held at Gandhinagar under the chairmanship of Chief Minister Shri Vijaybhai Rupani. According to the Central Government's Calimity Relief Fund, where there is a loss of more than 5% in crops, assistance of Rs. 1 per hectare will be paid in poultry crops and Rs.

Shri Patel added that due to heavy rains and deficient rains in the state this year, heavy rains during July-August-September months in some districts of the state as well as loss of farmers' crop during the end of October and first week of November began immediately. That is nearing perfection.

In addition to this, the state government has decided to assist farmers in the loss of crop due to the short-term rainfall survey but the loss is less than 5%.

It is pertinent to mention here that more than 3 lakh farmers will be provided central and state government assistance of Rs 1 crore. Besides, farmers who take out insurance in the PM's Crop Insurance Scheme will get separate benefits as per the guidelines of crop insurance scheme. Due to the stagnation in the state, the purchase was postponed at the support price of groundnut. It will be resumed from November 7.